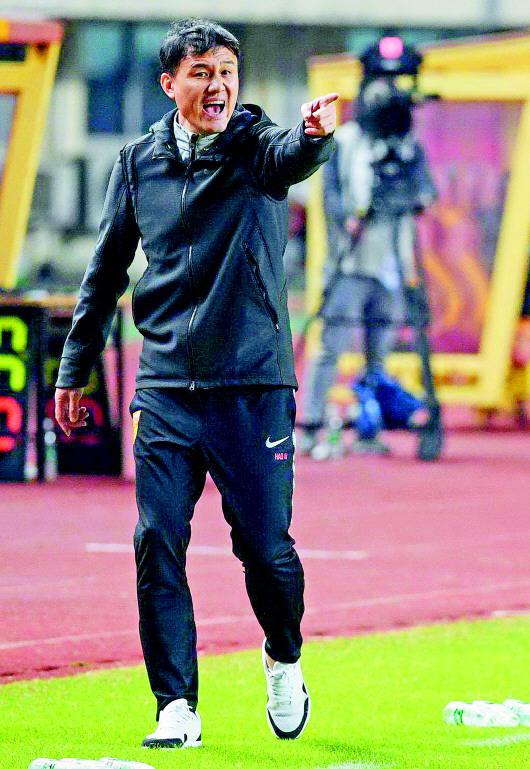 After years of training, Hao Wei's ability to govern the army is beyond doubt. (Expansion piece) issued by Xinhua News Agency

An official announcement issued by Luneng on October 5 broke the tranquility of the Shandong media and fan circles during the offseason and the double holiday. The news of Li Xiaopeng's resignation as the head coach brought to an end all previous controversies about Luneng's performance in the first stage and concerns about fighting Guo'an in the second stage. Instead, there are discussions on Li Xiaopeng, his successor Hao Wei and the future of the team.

The intensive schedule affects the body

The Luneng announcement showed that the reason Li Xiaopeng no longer serves as the head coach is due to physical discomfort. It seems to be an excuse, but this is indeed the main reason that Li Xiaopeng "dismissed get out of class". In the first stage of the Chinese Super League, the intensive schedule and long-term isolation had a great impact on Li Xiaopeng's physical condition. During the competition, Li Xiaopeng once had a high fever and was treated with Gua Sha on the chest and throat.

Before the start of the league, many media predicted that player injuries this season will be worse than in previous years. The fact is that this is the case. However, Li Xiaopeng, who is known as the "marshal", also has physical problems, which everyone did not expect before the game. After all, in public perception, athletes or sports workers often have better physical qualities than ordinary people. Inconsistent with this recognition is that the guidance of Li has been weak since he was young, and he has become a professional athlete. It is not his physical fitness, but his outstanding consciousness and technique.

As a player, Li Xiaopeng suffered from pulmonary hydrops, which almost ruined his career. In the second half of 2004, the long-term high-density competition caused him to have a continuous low fever and could not participate in the competition. Until recent years, Li Xiaopeng would take time to go to the hospital for body conditioning in the second half of the year, but this year's closed schedule has disrupted his original training and life rhythm, and body conditioning is even more difficult to talk about.

In addition to physical reasons, the pressure of external public opinion is also an important reason for Li Xiaopeng's choice to resign. People familiar with the matter disclosed that the fact that extreme fans reported Li Xiaopeng to the Shandong Discipline Inspection Commission website may become the fuse for Li Xiaopeng's resignation.

Familiar with all aspects of Luneng

As Li Xiaopeng's right-hand man and work partner for many years, Hao Wei is very familiar with the Luneng lineup structure and has experience in leading the team alone. Based on Hao Wei's knowledge of the club and the team, it would be more appropriate to choose Hao Wei to take over as the head coach when the second stage is about to start.

In 2019, Hao Wei served as the head coach of the National Olympics, which also means that he has a better understanding of the situation of young Luneng players. Duan Liuyu, Tian Xin, and Huang Cong were all his favorites when he coached the Olympic Games. According to the German transfer website, Huang Cong has already reported to enter the team's second-stage roster. Under Hao Wei, there may be more young people getting the chance to play.

Luneng may have no foreign handsome recently

The Luneng announcement also stated that the team will strengthen the selection of local coaches and increase the training of Chinese football talents. This probably means that Luneng will no longer introduce foreign coaches in the recent development stage. Since Kim Jong-nam joined the team in 1998, Luneng opened the door to foreign coaches. In 2017, the team coach Magath is currently Luneng’s last foreign teacher.

Affected by the epidemic, the proportion of local coaches in the Super League teams has reached a new high in recent years. In the first stage, Luneng Li Xiaopeng, China Fortune Xie Feng, Qingdao Huanghai Wu Jingui and Tianjin TEDA Wang Baoshan are all local coaches. Henan Jianye’s Chinese coaching team leader Yang Ji and Shenzhen Kaisa’s acting head coach Zhang Xiaorui also participated in the team’s coaching. jobs. But unfortunately, except for Luneng Taishan and China Fortune, none of the other teams led by the local coach entered the championship group.

There are more local coaches, but their embarrassing status as a "fire coach" has not changed. Both Wu Jingui and Wang Baoshan took over in the match. The teams of Yang Ji and Zhang Xiaorui have also found "genuine" foreign teachers. China Fortune's coach Xie Feng also turned into a regular post last season after he was in danger. It can be said that in the special stage when it is not easy for foreign teachers to come to China and the schedule is intensive, with the exception of Li Xiaopeng, the other local commanders are inseparable from the word "fire fighting".

It is understood that after Li Xiaopeng proposed to resign, Hao Wei was willing to take over Luneng Shuaiqi after repeated communication with the club's senior management. The question of whether he was a "day-time worker" or a "long-term worker" also received attention. Judging from the statement of the club, the use of local coaches has become a requirement for the team in recent years. As a representative of an excellent local coach, it may be difficult for other local coaches to shake Hao Wei's position as coach, but whether he can secure his position as coach for a long time depends on the results of the second stage of the Super League and the FA Cup.